Thanks for taking the time to learn more about the MS Warriors. Feel free to contact us with any general questions or if you are interested in joining the team, or becoming a sponsor. 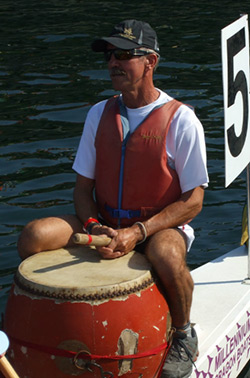 History of the MS Warriors

In 2007, a cheerful and optimistic physiotherapist, Robyn Davie of the MS society began chatting with Trisha Sims about the possibility of creating a dragon boat team.

This team was to be filled primarily with people with Multiple Sclerosis. The financial support in the first year came from Tom Benson of WildPlay Elements Adventure Park whose mother, Melody, herself deals with the effects of MS. The team was coached the first year by Robyn. With funding, a coach and a dream, the inaugural year for the MS Warriors Dragon boat Team began.

The first year was incredible. This new team was comprised of people with various levels of mobility, multiple levels of strength, co-ordination, fatigue, heat intolerance, sensory intolerance and certainly various fitness levels. In the first sessions the paddlers had a hard time paddling for 30 seconds straight. It was hard to imagine paddling 2 ½ - 3 minutes for a race…….but we did.

From the dream of competing in a sport with other able bodied people the possibilities of the team and each paddler grew.

In the second year, major sponsorship was again provided by WildPlay Elements Adventure Park as well as emd Serono, Teva Canada Innovations, and several local businesses. A new coach, Roman Matieschyn, was found and people began standing up to fill the roles needed to support the team.

The creation of this environment for paddlers with MS, as well as, a coach who understands the challenges of living with MS created many opportunities for growth. Some paddlers have moved on to paddle competitively or recreationally. Some paddle as guests with other teams. The team is entering more festivals. Ultimately, many of our paddlers have gone on to paddle Outriggers. Other paddlers enjoy personal growth, both physically and mentally, by undertaking the various roles needed to keep the team running. They also work-out off the water to increase their strength.

This team now has financial support from the MS Society, Thetis Lake Swim, the Gorge Super Sprints, Go Rowing and Paddling, emd Serono, Teva Canada Innovations, local businesses and team fund raising. Not a complete list, but close. Their financial support enables the team to run a very comprehensive program which has the ability to accommodate people with many different levels of MS. This team has become a way for people with MS to engage socially and physically with the world that some have lost. This is great fun, a great sport and great people.

Oh…..by the way…..this team has WON GOLD at the Victoria Dragon Boat Festival. We have come a long, long way from the first year. Hmmmmmm…….back to the possibilities!